For those of you who have not been to Meno a Kwena Tented Camp – a plan must be made to go! It is not just a traditional safari experience. It is a unique insight into how tourism does succeed in embracing community and culture, as well as wildlife and the wilderness, as an integral part of the tourism environment. 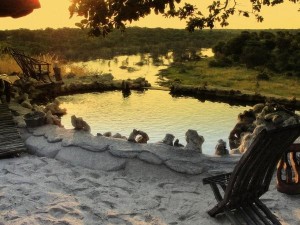 Meno a Kwena Tented Camp – view over the Boteti River

We were met by Jeff and other ‘Meno’ team members at the camp after a brisk 2 hour drive from Maun and we spent the afternoon in camp at the floating hide viewing wildlife. Elephants, zebra, fish eagle and wildebeest kept us occupied and our cameras clicking.  As sunset fell and the landscape transformed into a mirage of colours a rogue steenbok sprang out from nowhere, catapulting us from our seats in a desperate attempt to keep it in eyeshot while it sprinted along the river bank and made a gigantic leap into the river and swam across! We managed to get a photo of it – somewhat blurred, but despite of all our scanning around the vicinity we could not find any evidence of what could have made this steenbok ‘jump out of its skin’ and into water! Later we were told that there had been a leopard sighting in the area… Meno is definitely a camp that does not require you to go out on activities to be lucky with sightings. That night we also got to witness bush babies playing- chasing each other up and down the trees and the roof of the dining tent! 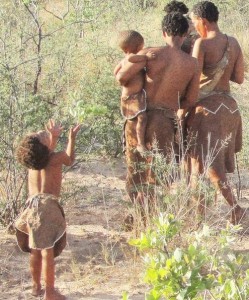 The next morning we went for a nature walk with Xao and members of his family and village, Xaixai. Any scepticism that I had had prior was immediately and totally eradicated! This was not culture put on a stage – it was natural, interactive, educational and extremely fun. They taught us some games which we played together, as well as song and dance. Besides entertainment, these activities were directly related to enhancing skills and attributes necessary for traditional hunting, care of the environment and family life. We ‘walked away’ with some great wilderness survival tips, a better understanding of the bushman culture, new friends, some light exercise and very happy faces.

After lunch it was time for a game drive! In the very safe hands of Cell our impressive guide, a short boat transfer along the Boteti River took as to the Makgadikgadi National Park. Our game drive vehicle was waiting for us and within our first 30 minutes we were blessed with wild dogs, white backed vultures, wildebeest, elephant, and getting stuck in thick sand. Being a lady, I found a cool spot under a raintree and equipped with an icy bottle of water and perched on a fallen tree trunk I proceeded to provide moral support to the boys as they proceeded to get the vehicle out of the sand. I even offered them some tips.

We continued our game drive along the western part of the park and the Boteti River and took in more delights with tawny eagle, honey badger, steenbok, giraffe, magpie and more…a portion of this drive runs along the fence /boundary of the national park that was erected to prevent the cohabitate of wildlife and cattle. This was necessary to prevent the spread of anthrax as well as other potentially fatal variables that can negatively affect wildlife, cattle and surrounding communities. This portion of fencing, however, as it cuts the river off from the park and thus access to water for wildlife, has resulted in wildlife forcing their way through the fencing – and not only opening up the fence to the free movement of cattle and wildlife across the boundary of the park, but also sometimes animals get entangled in the fencing causing fatalities.

The surrounding communities have culturally lived a pastoral farming lifestyle and thus access to some part of the Boteti River was deemed necessary for them to continue with their traditional life. However, with the emergence of Meno A Kwena and their close relationship both economically and sociably  with surrounding communities as well as government empowerment initiatives, the  communities now see the benefits of tourism as well as the destruction caused by the proximity of the fencing to the river. As we speak now, it is the communities that are now humming for the relocation of the fence. It is indeed a true sign that communities are‘owning’ their surroundings and proudly so. We look forward to the news of the movement of the fence. But in essence, visitors do need to be sensitised to this history in order that they may appreciate that change can be a process and that the protection of wildlife and the environment is key to the ultimate goal.

Yet another great experience that Meno A Kwena has to offer is an overnight pan trip. As it is quite a lengthy drive to the pans – to avoid disappointment book a 3 night stay at Meno and indicate that you would like to go there! I experienced the night out with Meno and amongst colleagues and family of Safari Destination earlier this year in June. It is an experience that is hard to describe and unforgettable – I felt like I was floating, with the endless panoramic views – a feeling of weightlessness. I understood then the cliché often used… ’sleep under a canvas of stars’. There is no other way to say it… and don’t forget to take your camera to get shots of you looking like you have special powers… but bring your thermals as it is cold at that time of year, and as much as you feel like a super hero when you are there – sadly, you are still prone to the elements… You may even be lucky and see a family of meerkats on your journey. This activity is not possible in the rainy season as the pans are flooded and it is impossible to get near them!

And of course a visit to Meno is often portrayed in photos against the background of a contrast of black and white stripes surrounded by a sea of soft dust… The Zebra Migration! The larger concentration of zebra is best experienced outside of the rainy season- perhaps between June-September (dependent on the weather maker).

Meno A Kwena is a great way to start or end your visit to Botswana and get a feel of the country with its complimentary offering of wildlife, culture and community in an intimate environment.

We have several itineraries that include Meno a Kwena, one of the most popular is our “10 night BEST VALUE Safari”, a combination Livingstone, Chobe, Delta and Makgadikgadi. You can download the details from our agent’s corner.