Clare and I were among the first to visit the ‘new’ King’s Pool Camp, which has been given a very impressive make-over…!

The new rebuild of King’s Pool is looking fantastic. They have used a lot of earthy colours such as browns, beiges, golds and black, which give a really refreshing feel to be somewhere completely different to the Delta.

From the main area and all the rooms, you have a lovely view over the Linyanti Swamps, teeming with hippos and crocodiles.

One of the special treats of King’s Pool is their very own in-house masseuse, who will spoil you with a massage on the deck of your room overlooking the swamps, for total relaxation in your siesta or after a hard day’s game driving.

The lodge has the advantage of driving along the riverbed in the late afternoons where you don’t have to search for any game, as hordes of different species come down to drink in the heat of the afternoon.

We were lucky enough to watch crocodiles displaying mating behaviour plus see hundreds of elephants, roan and sable antelope among other plains game.

Driving the river’s edge in the afternoon is a completely different experience to driving further back in the mopane woodlands in the early mornings looking for more predators. It gives a complete contrast of habitats.

This area is well known for its large herds of elephants in the dry season: it did not disappoint in that regard as we encountered huge breeding herds.

Another highlight of this camp is the two hides. One is underground in front of the water, meaning you are looking out at ground level up at the gentle giants that dominate this area.

King’s Pool suits first-time safari goers as it is an easy comfortable safari experience. Everything is pretty much thought out for you and not too much energy is required. Those first-time Botswana travellers who have heard about our large elephant populations, but don’t want to do the crowds of Chobe and have the Premier budget, would fit King’s Pool perfectly as they still get the barge on the river and game drives, all in the exclusiveness of a private concession. You have the flexibility of game drives, boating, walks and sitting back in one of the two hides relaxing with a gin and tonic, watching the animals coming down to drink.

The best months to explore this area in a typical year is July to October as the food resources and excess surface water from the rainy season have dried up, pushing the big herds into the Linyanti Swamps area to greener pastures and permanent water sources. In the Green and shoulder seasons, although the big herds will move out, the predators remain because they’re territorial, and the antelope that remain give birth to their young, meaning lots of babies around that make for easy pickings for the lions!

At the end of October I got the chance to see Ghoha Hills Camp which opened its doors in mid 2012.  The most impressive selling point of this lodge is its location which boasts a magnificent view. The lodge lies on top of the hills it’s named for, overlooking the Ghoha area and a small waterhole. Ghoha Hills offers a brilliant compromise between other lodges based in the Savute & Linyanti areas because it lies between them. The design of the lodge is stunning with the light colour schemes and pale woods used, making a really fresh, modern & welcoming impression.  Even being a grumpy morning person, I had to be impressed by the stunning sunrises, which I watched through my window in camp. 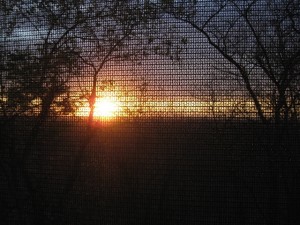 Sunrise from my room at Ghoha Hills Camp

The smooth sunrises at Ghoha ensured I was happy and ready to start my days of game viewing. The lodge offers game drives on their own private road network, daytrips into Savute or if clients stay 3 or more nights, into Linyanti. The lodge offers some flexibility however and is willing to cater to the preferences of guests in camp for activities provided there’s enough interest. With the longer daytrips you also need to keep in mind that the transfer takes a while, because the lodge is situated a while from the Savute marsh. It’s a 45 minute drive from camp to the airstrip and further again to the Savute marsh, but it was worth bumping around in the car on the sandy roads.

During my time at Ghoha Hills I saw so many things: thousands of elephants & buffalos, huge herds of zebras, giraffes and my personal highlight, a cheetah feeding on an impala. We found the cheetah underneath a little bush but the moment I got the camera out of my bag and tried to take a photo it ran away and I was left with a nice shot of buffalo “poo” next to our car instead. 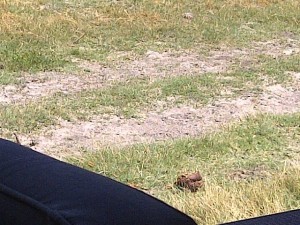 After I had overcome the big disappointment of my failed cheetah photograph I at last had the chance to get a nice photo of an elephant standing next to a dead tree, giving me a beautiful scenery shot and bringing the beauty of the area across. After spending a few days at Ghoha Hills, I was reminded how great the Savute area is and how much it is worth every visit.  As Ghoha Hills is one of the few lodges with family units (they have two) and are willing to take kids from 6 years onwards, it’s also a great family choice.

Over all, Ghoha Hills offers very good value for money and a great safari experience which is why we’ve packaged it in our 10 night Northern Highlights Standard itinerary and 12 Night Family Safari. 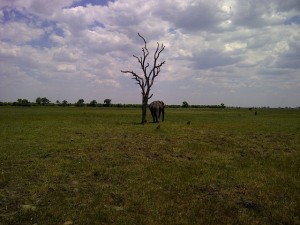 Check out our agents’ corner for more information on Ghoha Hills and packages that include the camp and the Savuti area.