We’re drifting along the Boteti River in the soft light of late afternoon when a mess of black and white stripes catches our eye by the water’s edge. Despite the zebra’s bold patterns, we might’ve gone past it completely. Lying almost camouflaged beside a dead tree, the fallen zebra reveals himself with occasional clouds of dust as he flails in the sand. “I really feel for these guys during this time of year’ says Walter ‘the Boteti River is the only source of water out here in the Makgadikgadi and the closest grazing is fifty kilometres away.” 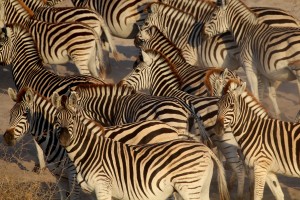 It’s the end of an exceptionally hot November’s day and an even hotter dry season that’s baked away any grass the zebras haven’t already eaten. Walter is guiding us from Leroo la Tau lodge, one of only two camps spaced forty kilometres apart on the Boteti River. We’re feeling a bit like the only people left out here, adrift on a river which has become a lifeline in the desert. “These zebras have to make a long trek inland for food through deep sand in intense heat’, Walter explains ‘once they’ve grazed, they need to return to the Boteti to drink. You can imagine how worn out they are and often by the time they arrive, they just collapse with exhaustion.”

We watch our zebra as the gaps between its kicks stretch out longer and longer. “This one won’t make it. Often they get taken down with a kick from another zebra as they scramble to get to water. Most likely he’ll become someone’s dinner during the evening, or over the next few days.” The Makgadikgadi National Park is a harsh environment for the zebras, but these tough conditions are also what draws us in and leaves us in awe. With the Boteti River providing the Makgadikgadi’s only water during dry season, this is a place to forget searching for big cats and soak up the spectacle of thousands of zebras and wildebeest tumbling down river banks to water. 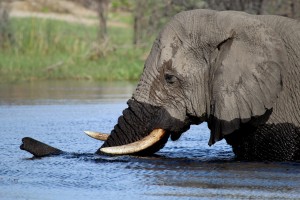 As sunset nears, we spot huge dazzles of zebras peering down to water, desperate to drink but hoping someone else will test the water for lurking crocodiles. Once the first zebra drinks, the crowds descend, kicking up sheets of dust that catch the fading light. Further upstream, we spot movement under a tree by the water’s edge. We cut the motor and drift closer as a big male lion comes into focus, busy feeding on a zebra. As we take in more of the scene we notice a second male, a big black-maned Kalahari lion eyeing us from further up the bank. So much for not travelling here to see the big cats. As we drift, we listen to the bush and watch the lions playing with their food, soaking up the quiet as the only people out on the river.

We’re chugging through thick sand under acacia trees the next day and pointing out elephant bulls and giraffes when Walter stops the vehicle to stare at tracks in the sand. “Rhino’ he says, ‘the rhino came through here. And there’s a smaller set of tracks too. This is the female that was pregnant when we last saw her. She’s had her calf” the grin on Walter’s face is palpable. With rhino poaching at an all-time high in South Africa, Botswana has been incredibly successful at keeping its own rhino population protected. Adding a calf to the statistics for Botswana is no small feat. It’s a hopeful sign of future population growth and preservation of the species. 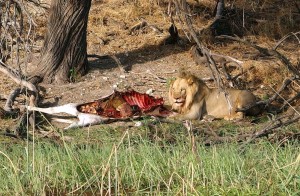 Walter drives us to a big wooden structure under an acacia tree. “This’ he says ‘is the world’s most expensive hotel room. It’s a rhino Boma, and it was only ever used for one night.” Walter tells us the story of two female rhinos who walked out of the Okavango Delta, only to find themselves hundreds of kilometres south-east in the Makgadikgadi National Park. The structure was built to house a male rhino, re-located from Khama Rhino Sanctuary and introduced to the area so the females would find him. It only took one night for the females to visit the crude but effective hotel room, and now the Makgadikgadi has a small but thriving rhino population, monitored closely by the Botswana Defence Force.

Later, as we’re crossing the Boteti River to get back to the lodge, Walter tells us we’ll have a quick stop for sundowners. He leads us through the bush, insisting we walk just a little further to get to the best view of the sunset. As we turn the corner, we spot a long table laid out for dinner in the bush and a fire already going. The staff from the lodge are already here with warm grins and cold gin and tonics. As we drink down the day, a chorus breaks out amongst the staff, their voices warming us over the campfire as the emerging night sky finally cools the desert. 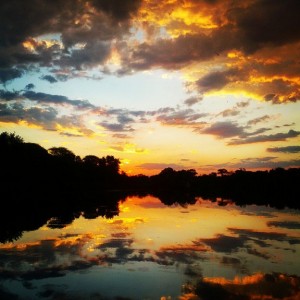 Leroo la Tau focusses on game viewing, both by boat (eleven kilometres of river is for the lodge’s exclusive use) and by game drive in the national park. On a three night stay, longer day trips to Nxai Pan national park are also possible.

Meno a Kwena offers full day game drives into the national park and short boat cruises. The camp also provides a break from the usual safari routine by offering walks with the San people for insight into their traditional hunter-gatherer way of life. On a minimum three night stay, guests can head further afield for a sleep-out on the salt pans (dry season only). 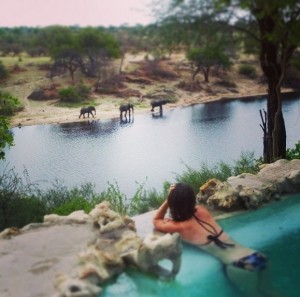 Best combined with: For first-timers to Botswana – as part of an 8 night or longer itinerary with Chobe National Park, Moremi Game Reserve or Khwai & the Okavango Delta. The Boteti River is also a fantastic place to un-wind after an intense mobile safari as guests can opt out of activities to stay in camp and watch the animals arriving at the Boteti to drink. The Boteti & Magkadikgadi National Park are great for repeaters to Botswana who’ve already ticked off the better known parts of Botswana.

Our Recommended itineraries including the Boteti/Makgadikgadi