But, we actually have them quite often. It’s just that we never really feel them. Although the quake had a 6.5 magnitude, the only real disruption to our lives was the bleeping of a thousand cell phones during dinner time, as everyone asked “is it just me, or….did anyone else feel that?”
And, sorry to say – that’s as exciting as it got. 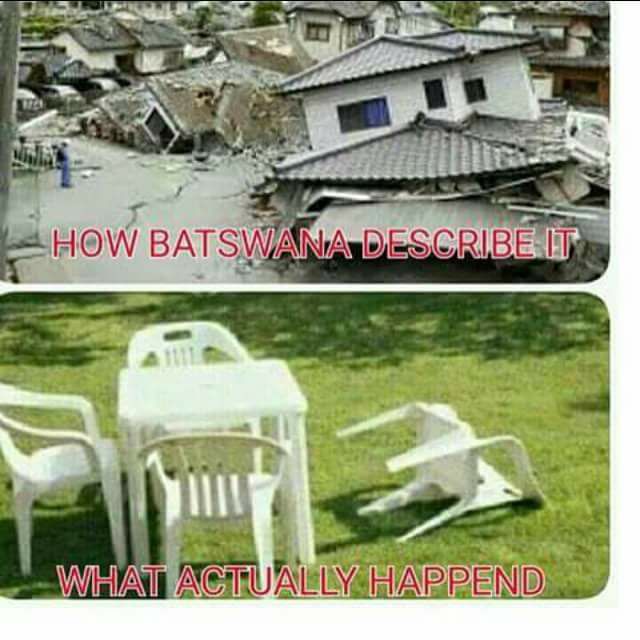 Why is that? Well, it turns out that living in the Kalahari Sand Basin works out quite handy in minimising the effect of tectonic plate movements.
Those same sands that fill with the Okavango’s waters & give us a reason to sweep our floors daily, also act as a giant shock absorber. If you were to take a shovel and start digging in the centre of Botswana, you’d be several kilometres down before you hit bedrock. In the middle, what you’ve got is sand & only sand. When tectonic shifts happen deep down below, the vibrations get muffled by all of that sand, so even if they’re ‘big’ earthquakes, they’re too disrupted by the time they reach the surface to have much impact.

Having said that, most waterways in Botswana are influenced by fault lines & tectonic plate movements. The Okavango Panhandle is channeled between two faultlines, then spreads out into the alluvial fan & abruptly stops at the Thamalakane fault line which then diverts the watercourse to the Boteti in years of plenty.

The Kwando River hits a big fault line (the Linyanti) which pushes the water out into the Linyanti Swamps, forces the river to change direction (and names) to become the Linyanti River (and later, joins other waterways to become the Chobe).
Interestingly, no-one really knows how the Savute channel works & what makes it’s flow stop and start, but theories abound that it’s shifting tectonics which are mostly responsible. Water in the channel has just passed Wilderness Safaris’ Savuti Camp in the last week or so, so let’s see if those earth tremors give it the push it needs to fill our Savute Marsh this year!

Otherwise, keep calm & carry on. Safaris continue as normal – Botswana has just been busy moving heaven and earth to impress her travellers!