Last weekend we spent a few days in Vic Falls and were excited to meet the famous cheetah Sylvester, who lives in the private concession of “The Elephant Camp” a few kilometers outside of Victoria Falls in Zimbabwe. 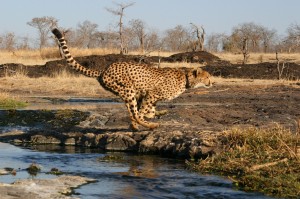 Here is his story:

In April 2010, in the Lowveld area of Zimbabwe, a cheetah gave birth to five cubs. Sadly within two days, in a cruel act of nature, she and four of her cubs were fatally attacked by a male lion, something which is common between apex predators in the wild. The sole survivor was discovered by a game scout named Sylvester, who witnessed the event and the cub was named after him by Norman and Penny English who became his surrogate parents. Norman worked in National Parks and Wildlife Management for many years and now heads the anti poaching unit in the Bubi Conservancy. Penny is a registered nurse and having both their experience was invaluable in the attempt to keep this young cheetah alive. At two days old, Sylvester still had his umbilical cord attached and unopened eyes. 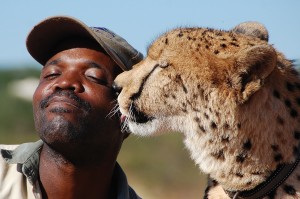 Sylvester is an orphaned cheetah who found a home in the private concession of The Elephant Camp in Victoria Falls, Zimbabwe

Over the following six months the hard work and devotion from the English
family was rewarded but it did not come easily. Feeding was complicated and
Sylvester grew faster than his bones could grow but the struggle to find a
suitable formula was assisted by the many cheetah experts who passed on
information. In time a dietary plan that suited Sylvester was formulated and
he  began to respond.
As Sylvester was never destined to become a pet, and being a specially
protected animal on the endangered species list, the Department of National
Parks and Wildlife Management have naturally been involved from the outset
with Sylvester’s welfare. A  plan needed to be formulated for a future
permanent home for Sylvester, and in this regard VFWT became involved. Despite numerous release attempts, cheetah, apparently, do not survive in the wild without experiencing the maternal care of a mother for the initial twenty two months of their lives. The human imprints of upbringing in captivity are not conducive to a wild release with rehabilitated cheetah often coming into contact with human settlements and being seen as “problem” animals.

The Sanctuary that Vic Falls Wildlife Trust operates from has large areas of
open grasslands where a cheetah can exercise naturally and build up the
speed for which they are renowned. With no large predators around and the
support from his three carers who exercise him extensively and assist in
nurturing  this orphan, Sylvester has settled in to his new life with
vigour. Through our educational programme, Sylvester interacts with
schoolchildren and guests who visit the Elephant Wallow during other
activities. He will become an “ambassador” cheetah, interacting with the
public to raise awareness of their peril as a species and the challenges
they face being on the endangered species list.

Here in the Victoria Falls region, cheetah are a rare sighting and whilst
VFWT respects that the ultimate aim is to promote the conservation of
wildlife and are merely custodians of this magnificent animal, funds need to
be raised for his upkeep. With feeding, exercise, care and constant
companionship, Sylvester has already adapted perfectly to his new
environment.

Guests at The Elephant Camp have the unique opportunity to experience Sylvester, learn about his endangered species and can support this good cause.

We at Safari Destinations would like to raise awareness for this very important project.

Find out more about Sylvester the cheetah on Facebook: http://www.facebook.com/pages/Sylvester-Cheetah-Ambassador/169927003078626 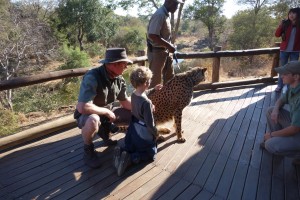